The MHIS is a tool used by CHIA, legislators, policymakers, employers, insurers and other stakeholders to track and monitor the experiences of Massachusetts residents in obtaining timely and affordable health care. While national data sources can help to monitor some aspects of health insurance coverage and health care access, this survey provides the ability to track issues that are specific to Massachusetts. The MHIS additionally enables CHIA to track key populations that are of particular interest to the Commonwealth. The 2019 MHIS was fielded between April and July 2019 and a follow-up study was fielded between December 2019 and January 2020.

CHIA has produced several products sourced from the MHIS:

Research Brief: Over Half of Massachusetts Residents Report Unmet Health-Related Social Needs in Their Families
(June 2021)

This brief is CHIA’s first step to document the burden of unmet HRSNs in Massachusetts and better understand how they are experienced by residents and their families across the state.

An Inside Look: Affordability Findings from The
Massachusetts Health Insurance Survey (MHIS)

Research Note Series: An Inside Look: Affordability Findings from the MHIS
(February - May 2021)

A new series of research notes—An Inside Look: Affordability Findings from the MHIS—explores health care affordability issues that Massachusetts residents face despite high rates of health insurance coverage in the Commonwealth.

Findings for the Inside Look series come from the Massachusetts Health Insurance Survey (MHIS). The MHIS provides information on health insurance coverage, health care access and use, and perceived health care affordability for the non-institutionalized population in Massachusetts.

Please note: Unexpected medical bills may reflect a variety of factors, including gaps in health insurance literacy, receiving care from an out-of-network provider who was thought to be in-network (often referred to as surprise medical billing), or balance billing by providers (defined as billing the patient directly for the balance not covered by insurance). 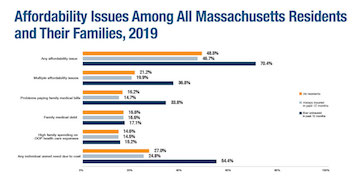