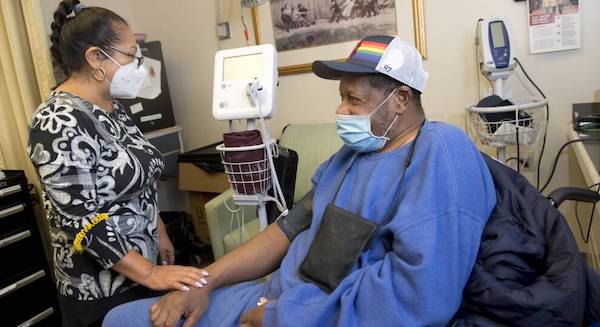 Black and Hispanic residents in Massachusetts struggle to pay medical bills, find it harder to access doctor appointments and have patchier health coverage than their white counterparts, according to a new report released Thursday.

Inequity in Massachusetts’ health care plays out at each step of the process: in insurance, getting appointments and paying for care, according to the report from the Center for Health Information and Analysis, an independent state agency that tracks health data. The report, which was conducted using data from 2015, 2017 and 2019, will serve as a baseline for researchers to compare against to understand what changed in health care access during the pandemic, said CHIA Deputy Executive Director of Research Dr. Zi Zhang.

Pushing for solutions are groups like Health Care for All, whose Help Line director Hannah Frigand pointed to legislation at the statehouse that would ease insurance and health care processes, and Black Boston's COVID-19 Coalition, which is calling for equitable pandemic recovery and on Thursday called for the state to reopen mass vaccination sites in predominantly Black neighborhoods.

Among the key report takeaways, three-quarters of Hispanic residents, and 78% of Black residents with low family incomes reported having continuous health insurance coverage over the last year or more, compared with more than 90% of white residents.

“When people don’t have stable coverage, their care gets interrupted,” said Zhang.

Over 39% of Hispanic residents with moderate incomes reported difficulties accessing care at a doctor’s office or clinic, compared with 29% of white residents in the same income bracket. Inability to access quick check-ups and lack of insurance coverage play a role in how long people choose to delay seeing a doctor.

Racial disparities evened out at lower income levels for those struggling to pay for care. According to the report, within every racial and ethnic group, the highest rates of family medical debt or problems paying medical bills were for residents with family income from 139% to less than 300% of the Federal Poverty Level.

The report rings true for organizations on the ground seeking to help residents access care at a good price.

“Coverage just isn't affordable and accessible to a quarter of our population, as this report points out,” said Frigand of Health Care for All, which helps connect residents with affordable care. She said callers on the Portuguese and Spanish lines mention cost often, along with many Black residents.

Her organization is tackling the issues of health care cost and access on Beacon Hill, advocating for a slew of bills, including one that would make medications and treatments for chronic conditions available without cost, and lower premiums for individuals and small businesses. Another would simplify the authorization process to get health insurance.

But health care access is playing out more immediately in the pandemic, and some advocates don’t want to wait on the legislative process to make change.

Black Boston’s COVID-19 Coalition decried a move by the Baker administration to open booster sites at Fenway Park and Gillette Stadium, noting that when the state started vaccinating at Fenway, 96% of those residents were white. They’re calling it déjà vu all over again.

“Boosters, child vaccines, in Boston’s Black and Latino Community is dangerously low and lagging,” said Steering Committee member Louis Elisa in a press statement Thursday. She noted the outcry over Gov. Charlie Baker’s decision back in January to open the Fenway site led to the City of Boston stepping in to urge and work with the state to open the vaccine site at the Reggie Lewis Athletic Center in Roxbury, which administered 100,000 vaccine doses in its first three and a half months.

The organization is urging Boston Mayor Michelle Wu and Baker to re-open the Roxbury site.

The CHIA study is the first of its kind in Massachusetts to track this level of detail on race disparities in health equity, but it doesn’t necessarily explain why such inequities exist, according to Zhang. He said the organization is in the midst of conducting studies that will expand upon this research.

“It's really the first time that we are systematically documenting health care–related issues by race, ethnicity and family income,” said Zhang.