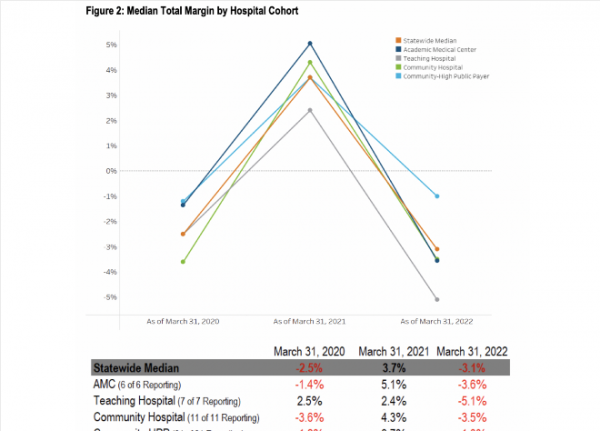 Acute hospital profitability, as measured by the median total margin, reported -3.1%, a decrease of 6.8 percentage points in comparison to the same period in the prior year.

A newly released state report is offering a "sobering picture" of the financial performance of Massachusetts hospitals in the second quarter, with operating margins driven into the red from inflation, supply-chain costs and related overhead costs.

According to the report, Bay State hospitals median operating margin was -2.5% from the start of the fiscal year until the end of March, a decrease of 2.7 percentage points compared to the same period last year.

The findings are part of the Center for Health Information and Analysis quarterly hospital financial performance report, which provides an update on profitability, liquidity and solvency for the fiscal year-to-date period ending March 31. The report includes second-quarter results for most hospitals, but made clear it may not be indicative of their financial position at the end of the year.

“CHIA’s latest report paints a sobering picture of hospitals’ financial footing two full years into the pandemic,” Daniel McHale, vice president of health care finance and policy for the Massachusetts Health and Hospital Association said in a statement. “With the median operating margin standing at negative 2.5% ... it is clear that Massachusetts healthcare organizations are feeling the economic crush of this crisis more than ever.”

Acute-care hospital profitability, as measured by the median total margin, reported -3.1%, a decrease of 6.8 percentage points in comparison to the same period in the prior year. Of 61 hospitals reporting, 57% of them reported losses during this period. That’s compared to 31% with negative margins last quarter.

Further, all four hospital cohorts — academic medical centers, teaching hospitals, community hospitals and high public payers — saw a decrease in profitability when compared to the prior year, with academic medical centers reporting the largest drop of 8.7%. All cohorts also saw a decrease in median operating margin, with teaching hospitals reporting the lowest operating margin of –4.6%.

The statewide median non-operating margin, which is dependent on the investment markets, was 0%, a drop of 2.1% compared with the same period last year.

However, aggregate expenses rose to $1.8 billion, as hospitals fought spikes in salaries, inflation and product shortages. For the fiscal year-to-date period through March 31, expenses exceeded total operating revenue by $475 million, according to the report.

“Inflation has added an entirely new layer to healthcare organizations’ financial pressures in 2022. Unlike other sectors, providers cannot simply pass along the increased costs of labor, energy, and supplies to consumers. That means they are absorbing these skyrocketing overhead costs all on their own, while still navigating the same economic challenges that have existed since COVID-19 began — particularly significant cost increases related to traveling nurses and staffing agencies,” McHale said.

In the time period measured, hospitals reported receiving $229 million in federal and state Covid-19 relief funds as operating revenue, which is included in their total margins.