About CHIA » In the News » Massachusetts spent $1.5 billion less on health care in first year of pandemic

The decrease came as health care institutions halted elective procedures and patients canceled screenings and other preventive appointments out of fear of catching COVID-19. Experts said spending would surge back in the near future, as hospitals grapple with the consequences of delayed care.

“We’re trying to constrain the growth of health care spending, [but] not the way that it happened in 2020,” said Ray Campbell, executive director of the state’s Centers for Health Information and Analysis, which released the report. “What you saw was a very indiscriminate approach.”

The new data show that Massachusetts’s total health care expenditures declined 2.4 percent to $62.6 billion between 2019 and 2020. The figure includes all costs of medical expenses and other payments to providers, all patient cost sharing such as deductibles and copays, and costs associated with private insurance.

The totals for 2020 include millions in supplemental MassHealth payments, but due to the timing of the awards, do not factor in billions in federal relief. Had federal funding — including $1.9 billion to acute care hospitals and $168.6 million for hospital-associated physician groups — been accounted for, total health care spending would have risen slightly from the $64.1 billion in 2019 to $64.7 billion in 2020, still one of the lowest increases in spending the state has seen since it began tracking the data.

The state has sought for a decade to constrain health care spending, and has at times struggled to hold industry players to no more than 3.1 percent growth. Yet in a year when the state successfully exceeded that goal, the reasons why may wreak havoc down the line.

“You saw decreased screenings, and you hear about the studies that are starting to show the health consequences of all the reduced screenings and preventive procedures,” said Campbell. “It was a success as a cost control from that perspective, but I think what it showed is that there are unintended consequences and costs when you don’t do it the right way.” 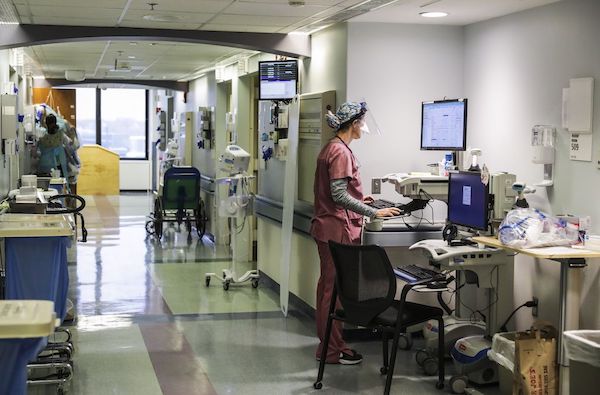 Lower spending decimated the margins of acute care hospitals. The average total margin — all operating and nonoperating revenue minus expenses — was negative 4.5 percent in fiscal 2020. COVID relief funds pushed hospitals back into the black to an average 2.6 percent margin, which was still almost a percentage point lower compared to the prior year.

Fewer people at hospitals and doctor’s offices translated into less business for other parts of the health system. As hospitals discharged fewer patients, nursing home occupancy dropped from 86.9 percent to 75 percent. That figure was compounded by high numbers of nursing home deaths due to COVID.

MassBio, an industry lobbying group for drug manufacturers, defended the spending, and faulted the agency for not doing more to highlight its rebate levels.

“In 2020, when people could not or would not visit their doctors for regular or preventative care, the one constant that kept them healthy and out of the hospital was their continued ability to access the medicines they needed to keep them healthy,” said Joe Boncore, chief executive of MassBio, in a statement. “Unfortunately, this report does not measure healthcare spending that is saved because of prescription drug uptake and adherence.”

Pharmaceutical Research and Manufacturers of America, a national lobbying group, said the increases represent upticks in demand and utilization, while nationally prices for medicines fell. The group also seemed skeptical that spending on prescriptions increased so significantly, given that, nationally, spending increased an average of 3 percent.

Insurers reaped the benefits of overall decreased spending. With premium rates set before the pandemic, and utilization and spending substantially less, average insurer gains increased from $4 per member per month to $19 per member per month. Those gains were even after insurers handed out mandated rebates and voluntary premium credits.

In a statement from the Massachusetts Association of Health Plans, which represents 17 insurers in the state, president Lora Pellegrini pointed out that insurers spent to stand up telehealth coverage options, and that insurers issued $60 million in premium rebate checks. She said the focus should remain on reigning in pharmaceutical spending.

“As we emerge from the challenges of the COVID-19 pandemic, action must be taken to address continued increases in prescription drugs and provider prices, and we must hold all entities accountable for cost growth, enhance competition, and correct market dysfunction,” she said.