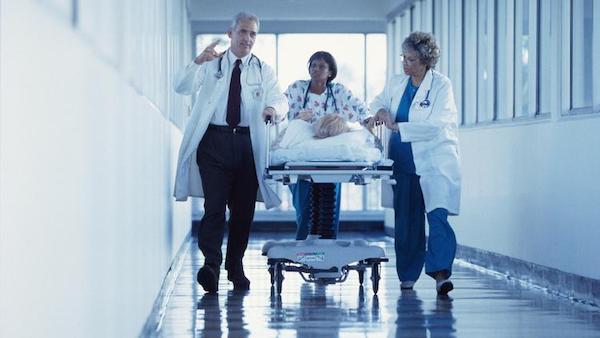 In preliminary numbers released by the Center for Health Information and Analysis on Tuesday, health care spending grew $2.1 billion to $60.9 billion in 2018 — right at the state’s 3.1 percent benchmark. That number may change as the state processes more claims data, but the preliminary figure appears to be a promising start to keeping spending within the state's tougher guidelines. Prior to this year, the benchmark was 3.6 percent. 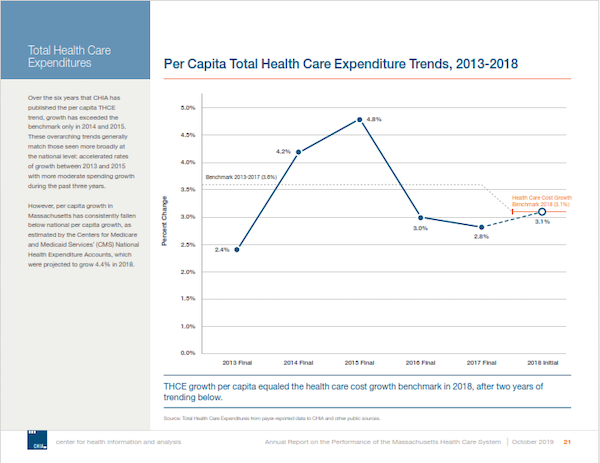 The state met its lower benchmark for health care spending in 2018, the first year of the tougher goal.

Courtesy/Center for Health Information and Analysis

David Seltz, executive director of the Massachusetts Health Policy Commission, saw both good and bad news in the report. He praised the overall cost growth slowdown, but said that "the burden of health care costs on Massachusetts employers and residents continues to grow."

"Over the past two years, growth in consumer out-of-pocket costs (6.1 percent) and premiums (5.2 percent) have outpaced inflation (2.9 percent) and wage growth (2.8 percent). Spending on certain parts of the health care system grew faster than the benchmark, with hospital services, pharmacy, and health plan administrative costs among the top drivers."

MassBio, the lobbying group representing the state’s pharmaceutical industry, said the growth rate shows a continued slowing of cost growth in that area, and that rebates represented $225.4 million in savings for insurers in 2018 alone.

“Using this measurement of the real costs to the state’s healthcare system, prescription drugs are the third smallest category of healthcare spend and the fourth smallest contributor to the change in total healthcare expenditures,” said Robert Coughlin, president and CEO of MassBio. “As our state’s policymakers consider healthcare reform legislation this session, we urge them to look carefully at the real drivers of healthcare costs in Massachusetts and examine why health insurance out-of-pocket costs and premiums are growing at twice the rate of inflation and substantially faster than the state’s at-benchmark 3.1 percent total healthcare expenditure growth rate.”

Meanwhile, the state made large strides in holding down spending on MassHealth, the state's Medicaid program. The $15.1 billion MassHealth program represents a quarter of all health care spending in the state, and didn’t grow at all from 2017 to 2018.

That fact was largely due to the 2018 launch of the Accountable Care Organization program, which assigns MassHealth patients to a health system to better manage the patient’s care and consequently spending. Spending was also helped by a 4.4 percent decline in membership

Other takeaways from the report include: