Many of the state’s small and independent hospitals, buffeted by two years of heavy losses during the pandemic, are facing a significant financial crunch and fear they may not be able to weather another substantial COVID-19 surge on their own.

At one point this winter, hospital executives thought they had weathered the worst of the pandemic. Then Omicron came. A decimated workforce, further culled by illness, struggled to care for the latest flood of patients. Expenses for temporary workers and overtime for existing staff soared. And revenues plummeted amid a halt in elective procedures. 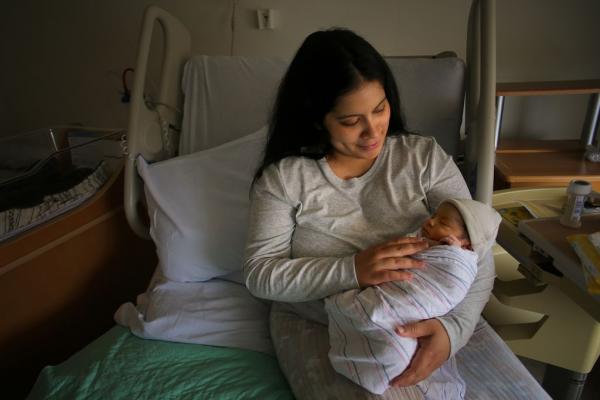 Yadisha Melendez snuggled with her newborn, Ramses Melendez, at Lawrence General Hospital Birthing Center. Small- and medium-sized hospitals have faced increased costs during the pandemic while revenue has decreased.

“It was the perfect storm,” said Deb Wilson, chief executive of Lawrence General Hospital, which was losing $258,000 a day at the height of the Omicron surge early this year.

For small independent hospitals, the pandemic has deepened longstanding financial concerns or reversed former fortunes. Unlike larger peers that have financial cushions to weather down years, independent organizations instead are cutting costs to make things work, such as sacrificing large projects. As a result, smaller organizations, which often offer lower-costing care and are economic engines for their communities, are at a competitive disadvantage for the future.

While the federal and state governments have showered the industry with billions in pandemic-related aid, hospital executives said even those generous amounts are not enough to make up for the losses. Massachusetts allocated more than $500 million to state hospitals through the pandemic; meanwhile federal officials granted hospitals and associated physician groups more than $2 billion in funding in 2020 alone, according to the Center for Health Information and Analysis.

And more money is coming, with the state about to release $250 million in federal stimulus money set aside for hospitals. By contrast, the requests from hospitals and health systems for that pool of money — representing hospital’s lost revenue and added expenses solely because of COVID — totaled $2.8 billion.

“When we contemplated state relief, we were thinking about coming to the end of the pandemic. And then Omicron started,” Walsh said. “It’s been continually worse from a cost and staff perspective since then. We’re still not on financially stable footing and won’t be for years to come.”

Lawrence General Hospital has struggled in particular. The hospital has received $80 million in federal and state aid to date, and has requested another $47 million to cover lost revenue and higher expenses from COVID.

The hospital was cutting costs even before Omicron, and had begun to renegotiate all contracts with its vendors, create teams to make sure it was billing for all its services, and adopt more flexible staffing models to keep staffing costs down. It signed an affiliation deal with Steward Health Care, which Wilson said will hopefully increase revenue by bringing more specialists to the community hospital.

Yet Omicron further exacerbated losses, threatening agreements the hospital has with debt holders. Reneging on those obligations would allow creditors to close services to save money, and Wilson worried that key operations such as maternity and pediatrics could be at risk.

Lawrence General expects to receive less than half of its ask, Wilson said. While the recent state funding will help the hospital avoid drastic steps, it isn’t enough to stabilize things for the long term, she said.

“The reason why we need further funding is because we’re always one crisis away from needing to close services,” Wilson said. “Further funding is necessary to get us to a more solid balance sheet position. This will get us just enough.”

Similarly, Spiros Hatiras, CEO of Holyoke Medical Center, said he is deeply grateful for the pending infusion of stimulus money. The hospital has received approximately $30 million in state and federal aid to date, and requested $12 million from the state for its remaining COVID revenue losses and costs. Hatiras expects to get just a bit more than half his request. While Holyoke likely won’t be able to cover all its losses with the new aid, the money should be enough to keep bond holders at bay, while cushioning other financial blows.

Longer term, a reworked agreement with the federal government on Medicaid reimbursements may also bring more money to state hospitals. But uncertainty over the future looms.

Even if another surge doesn’t come, Hatiras said, he still hopes for additional funding down the road, as the hospital confronts the aftereffects of the pandemic, such as needing to recruit more nurses.

“We’re walking a fine line. A lot will depend on what happens between now and the end of the year,” Hatiras said. “If we get another surge, all bets are off.”

Even independent hospitals that were financially stronger before the pandemic have had to reassess long-term plans. Emerson Hospital in Concord has received $27.9 million in state and federal aid to date, and requested another $15 million.

The hospital put off installing a new medical record system because of its losses.

“What we’re left with is higher labor costs, higher supply costs, harder to get patients out of the hospital, and delayed strategic projects because the money you would have made or saved isn’t there,” said Emerson CEO Christine Schuster.

Even before the pandemic, CEO Edward Kelly said, Milford Regional was grappling with expansions to meet ever-increasing demand for its services. The hospital has received $22.8 million in federal and state relief for losses to date, and requested another $19 million. But Kelly expects to get only a bit more than $1 million of that.

Kelly said it would be challenging to get to a new financial normal even without another surge.

“You look at our financial statements in the pre-COVID way, you’d say you need to tighten our belt. But there’s no way we can do that right now,” he said. “We’re doing everything we should be doing. But . . . our industry can’t sustain the losses we’re seeing right now.”

Not everyone can put off investments due to financial shortfalls.

Sturdy Memorial in Attleboro had begun a $20 million renovation of its operating rooms before the pandemic struck. But other plans, such as building an outpatient rehabilitation center, have been put on hold. The hospital received $20 million in federal relief, and has requested another $19 million.

Aimee Brewer, CEO of Sturdy Memorial, estimates the hospital will receive just $1 million in the upcoming funding round. The hospital is looking at its supply costs and seeking to renegotiate its vendor contracts to cut expenses. While the impacts on Sturdy are still being analyzed, Brewer said losses have hurt the entire industry nationwide.

“We’re probably another surge away from a very concerning stage for health care across the country, not only from the cost and financial impact, but the staffing,” Brewer said. “You name it, it is at a breaking point, not to mention every day the effects of delayed care. . . . Every health system will have different levers to pull and a different way out of this.”