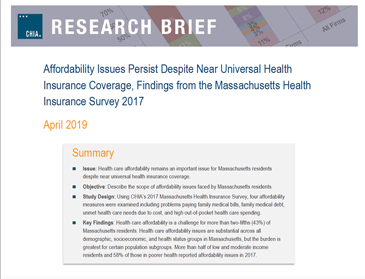 Massachusetts has had near universal health insurance coverage since implementing the state’s 2006 health care reform law with additional coverage gains attained under the Affordable Care Act in 2014. The uninsurance rate has remained below 4% following the implementation of key coverage expansions under the Affordable Care Act in 2014, with over 90% of residents covered all year. However, Massachusetts has historically had health care costs that exceed national averages, making affordability a challenge for many Massachusetts residents despite their insurance coverage.

The MHIS is a tool used by CHIA, legislators, policymakers, employers, insurers and other stakeholders to track and monitor the experiences of Massachusetts residents in obtaining timely and affordable health care. While national data sources can help to monitor some aspects of health insurance coverage and health care access, this survey provides the ability to track issues that are specific to Massachusetts. The MHIS additionally enables CHIA to track key populations that are of particular interest to the Commonwealth. The 2017 MHIS was fielded between April and July 2017.

CHIA has recently completed the process of conducting the Massachusetts Health Insurance Survey for calendar year 2019 and hopes to release the results during the winter of 2019/2020. 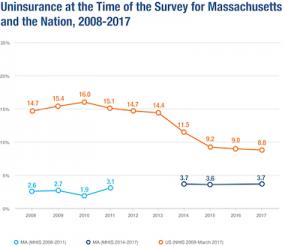